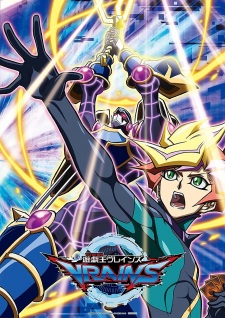 In the city of Den City, thousands of duelists take part in a virtual reality space known as Link Vrains, where users can create unique avatars and participate in games of Duel Monsters with each other. As a mysterious hacker organisation known as the Knights of Hanoi threaten this world, a high-school student named Yusaku Fujiki battles against them under the guise of Playmaker. One day, Yusaku encounters a peculiar artificial intelligence program, which he names Ai, who sets off a digital maelstrom in Link Vrains known as the Data Storm. As the appearance of this storm gives birth to Speed Duels, in which duelists surf the wind as they duel, Yusaku battles against Hanoi in order to uncover the truth concerning an incident that happened to him years ago.