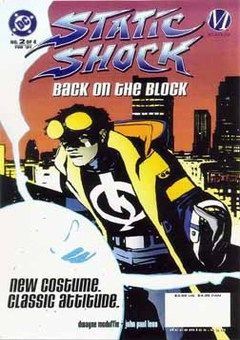 Virgil was a simple 14-year-old trying to survive high school. His best friend is Richie, and he has a crush on a girl named Frieda. He also has a dispute with a bully named “F-Stop” and was saved by a gang leader named Wade. Recently Wade had begun helping Virgil in hopes to recruit him, but Virgil is hesitant after his mother was killed in gangfire. Wade eventually leads Virgil to a restricted area for a gangfight against F-Stop’s crew, which is interrupted by police helicopters, during the disputer between the gangs and police, a shot was fired releasing gas causing mutations among the people in the vicinity, (This event was later known as “The Big Bang”) causing Virgil to obtain the power to control static electricity and become known as “Static Shock”. But also gave others surrounding the area to obtain their own powers, unfortunately, it also led several of them to become super villians against what their typical senses would tell them to do. The people who were mutated were then known as “bang babies” and their mutations apparently spread to other people around them, such as how Richie obtained his power of advanced intelligence, and later became Virgil’s sidekick.